One challenge for an intelligent interactive tutoring agent is to autonomously determine the difficulty levels of the questions presented to the users. This difficulty adaptation problem can be formulated as a sequential decision making problem which can be solved by Reinforcement learning (RL) methods. However, the cost of taking an action is an important consideration when applying RL in real-time responsive application involving human in the loop. Sample efficient algorithms are therefore critical for such applications, especially when the action space is large. This work (paper). proposes a bootstrapped policy gradient (BPG) framework, which can incorporate prior knowledge into policy gradient to enhance sample efficiency. The core idea is to update the summed probability of a set of related actions rather than a single action at gradient estimation sample. A sufficient condition for unbiased convergence is provided and proved. We apply the BPG to solve the difficulty adaptation problem in a challenging environment with large action space and short horizon, and it achieves fast and unbiased convergence both in theory and in practice. We also generalize BPG to multi-dimensional continuous action domain in general actor-critic reinforcement learning algorithms with no prior knowledge required.

The problem of difficulty adaptation can be formalized using Reinforcement Leanring by taking question difficulty as action and the suitability of a difficulty as reward: 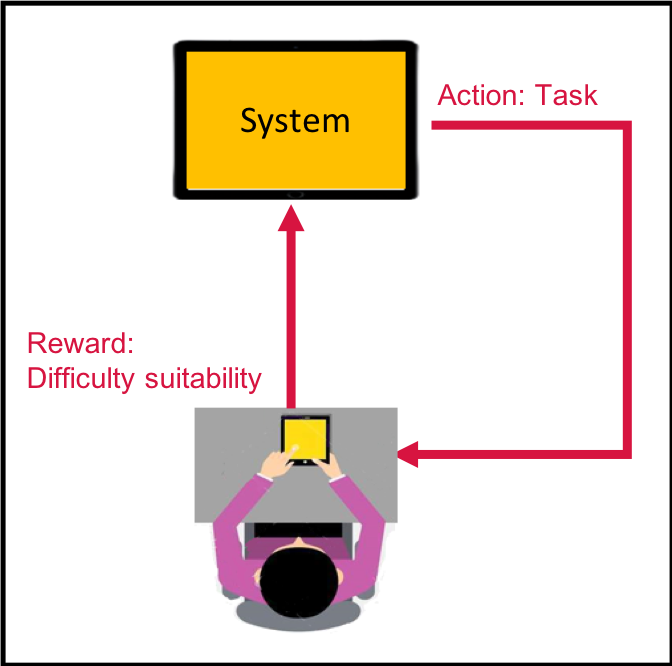 Policy gradient method is considered to be more stable than value-based RL method but a major drawback is its sample inefficiency. Due to the high variance in the gradient estimations, a large batch size is needed to ensure stable policy improvement. In a real-time responsive system, it cannot afford to use large batchsize. In fact, instead of batch update, incremental update with batch size of one is often employed in interactive systems to ensure good user experience. This work investigates how to make policy gradient achieve stable convergence with small batch size. 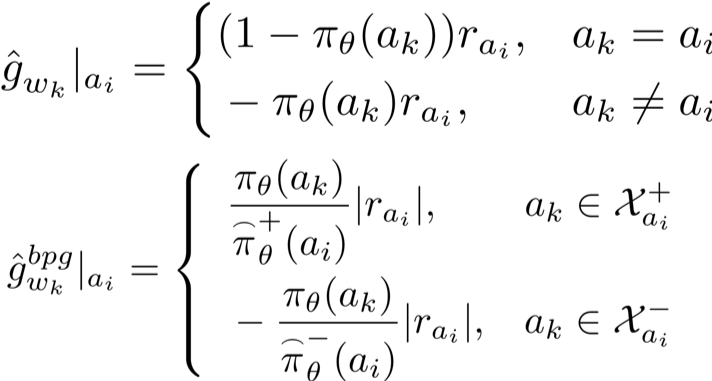 Compared to traditional policy gradient, the proposed method enjoys several advantages. Firstly, in each gradient sample, the agent does not raise a single action’s probability weights but that of a set of actions’. Thus it is more stable and less likely to be stuck with a certain action, regardless of the sign of the reward. As shown in the gradient to the softmax weights, the weight change direction no longer relies on whether the action is the sampled action and the sign of the reward. This property makes it possible for BPG to stably update policy even with the batch size equal to one. Secondly, in BPG the worse action’s probability can be decreased without actually exploring it and the better action’s probability can be increased before it has been selected. It is this property that makes it possible for BPG to find the best action without exhaustively trying every action. In the interactive application, this means that the agent can eliminate some undesirable choices without actually exposing them to the users and use the limited exploration steps to focus on the more promising ones.

How to ensure unbiased convergence?

In spite of the promising properties of the BPG, an immediate question is how to ensure that the surrogate gradient can still lead to the target optimal action, given that the gradient direction has been altered. Notably, the performance of BPG is dependent on the “quality” of the better/worse action set. Therefore, we investigated what kind of constraints on better/worse action set are required for unbiased convergence. 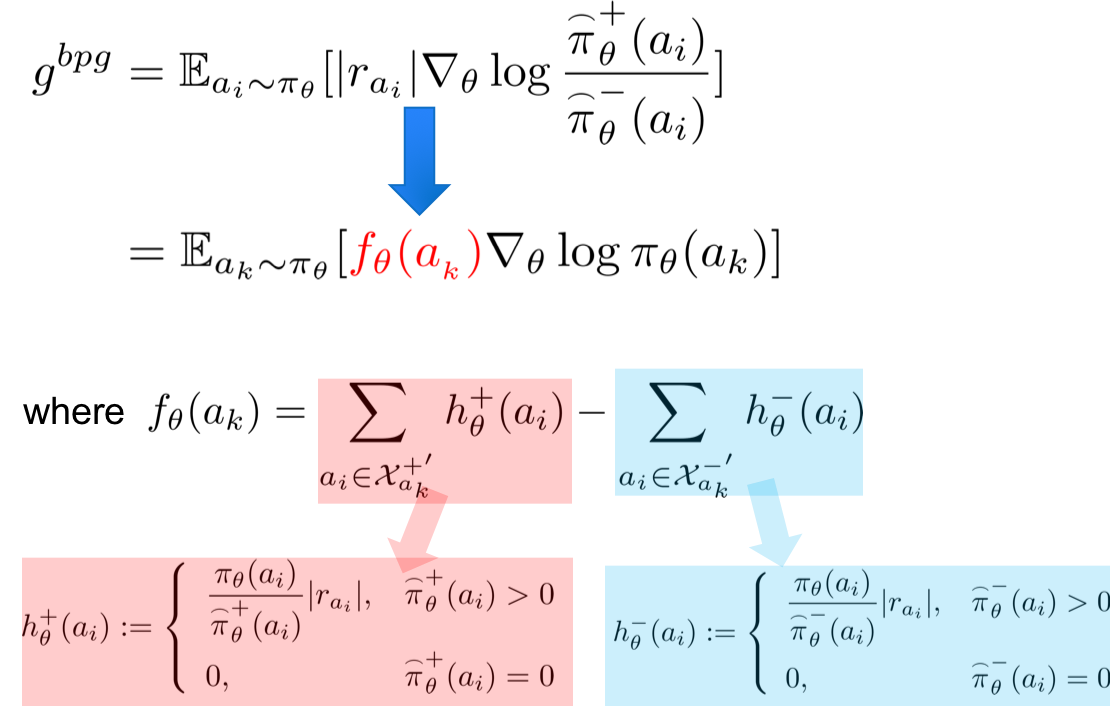 An interesting question is whether there is a certain special class of score function which can make the surrogate gradient direction still converge to the target actions. To answer this question, we provided a surrogate policy gradient theorem.

How to obtain Better/Worse Action set in practice?

The remaining questions is how to obtain the prior information of Better/Worse Actions. In the case of difficulty adaptation, there happens to be a convenient way to construct approximate better/worse action sets from prior information of difficulty ranking. Specifically, if a question is observed to be too easy or too hard for the user, then those questions which are even easier or harder than the current one can be considered as worse actions; and in contrast those questions which are harder or easier than the current one can be considered as better actions.

Although the information contained in above better/worse action sets is not accurate, the BPG with these sets can still guarantee unbiased convergence, because the corresponding score function indeed satisfies the sufficient condition. (The proof can be found in the published paper of this work)

The proposed difficulty adaptation method is evaluated on simulated data and compared with existing methods. The results showed that only the proposed method achieved unbiased convergence and presented the users with suitable difficulty levels.